The Most Problematic Ant Pests In Arizona Homes, And How To Identify Each Species

Ants are common household pests all around the world, and they often invade homes in order to access human food sources. It is generally assumed that ants prefer to feed on sweet tasting foods, and while this is true for many ants, each ant species has particular tastes. Ant species prefer to feed on starchy foods, fatty foods, or even meat, depending on the species. While many ants can bite, sting or both, ant infestations within homes are generally considered a nuisance, rather than a health threat. However, fire ants, especially the red-imported fire ant, are known to inflict medically significant stings, and carpenter ants infest homes in order to excavate nests within structural wood. Luckily, red-imported fire ants were eradicated from Arizona after dwelling for a short time in the southwestern portion of the state, but carpenter ants, argentine ants and crazy ants are problematic ant pests that are abundant within the state. 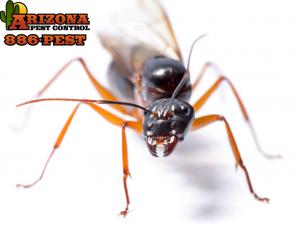 The Argentine ant has established an invasive habitat in Arizona, and they are commonly found in moist irrigated suburban and urban environments. Adults of this species are dull brown in color and the typical worker is about an eighth of an inch in body length. Although Argentine ants do not often bite or sting, their large colonies make them a serious nuisance pest within Arizona homes.

Carpenter ants infest homes by excavating structural wood, causing structural wood to weaken as a result. There exists numerous carpenter ant species in the US, but the most common species in Arizona is C. modoc species, which is commonly known as the western carpenter ant. Other Arizona carpenter ant species include C. vicinus, C. herculeanus, C. noveboracensis and C. essigi. Carpenter ants are among the easiest ants to identify, as they are the largest-bodied ants in the world. Carpenter ants are black and possess dark red legs. Crazy ants are largely a nuisance within Arizona homes, but they also bite before spraying formic acid into bite wounds. These ants are known for their erratic movements and relatively small size. The Tawny crazy ant is an invasive ant species from South America that sometimes appears in or near Arizona homes.

Do you see ants in your home every summer?