My Oh My! Why Do Spiders Have Eight Eyes?

One of the things that makes spiders so creepy is their many eyes. It is a little unsettling to turn towards dark corner and suddenly realize that you’ve got 8 beady eyes staring right back at you. Why do spiders need eight eyes, though? Why don’t they have two like humans? What do they need all those eyes for? Well, new research states that they need all eight of those eyes, as they each serve a very important purpose in letting spiders sense danger or prey around them. Each play a role to help keep that spider safe. 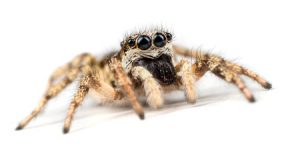 Scientists began working with jumping spiders to discover why they have so many eyes after it was discovered they can actually see in color and even ultraviolet light. Jumping spiders also actively hunt their prey rather than lay in wait for it, so they are an even better fit for studying their eyes since they probably play a pretty crucial part in their daily lives, certainly more so than spiders that use their webs to hunt. This new study found that the central and principle pair of eyes are skilled at recognizing and picking out the details in their surrounding environment. But they found that one of the side pair of eyes is crucial when it comes to warning a spider that something not in their direct line of sight is heading for them.

While the two central eyes help spiders detect details, researchers believe that the secondary eyes that are dotted around their head help jumping spiders detect motion. However, it is the pair of eyes right next to the pair of central eyes, known as the anterior lateral eyes (ALE), that the researchers of the study were primarily interested in, as this pair of eyes seem to be able to discern some detail as well. By dabbing a bit of paint over this pair of eyes, which is basically like a spider blindfold, the researchers were able to see exactly what those eyes do.

After placing spiders with and without the paint in an enclosure and on an iPod touch with a video of a black dot, the scientists pressed play on the video, and the dot would either expand or contract quickly, mimicking another animal running towards or away from the spider. Spiders that weren’t blindfolded on those two eyes were able to detect the presence and back away from it. However, spiders with the painted blindfolds on those pairs of eyes could not detect the movement, and didn’t react. It turns out that these eyes are crucial for detecting danger, as they act somewhat like our human version of eyes when we detect a baseball flying towards us at a baseball game and duck, even if the ball is somewhat out of our direct field of vision. This is called a “looming response,” which is basically how spiders and humans detect danger out of the side of our vision and duck for cover.

While our two human eyes do all of that together, spiders need a few extra pairs that work together to serve the same function of helping them see in many directions and detect imminent danger, as our own eyes do between the two of them.

Why do you think spiders have their vision separated into eight eyes that serve different functions rather than just two (like humans) that serve all of those same functions?