A Harvester Ant Sting Is More Painful Than A Fire Ant Sting, And Arizona Residents May Find Them Hard To Avoid During The Hottest Summer Days

It is not uncommon for homes in Arizona to become infested with ants. In many infestation cases, the ant invaders are harmless, but several species that can inflict extremely painful bites are abundant in southern Arizona. Luckily, the red-imported fire ant was eradicated from Arizona, but another group of ants in the state can inflict stings that are even more painful than fire ant stings. These ants are commonly known as harvester ants, and they are most abundant in desert regions, making them a threat to residents all over Arizona, but particular residents in the southern half of the state. 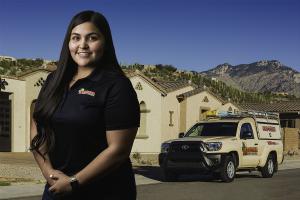 Harvester ants are often spotted with large-sized bits of plant matter in their jaws as they march back to their nests. If a nest is found, they should not be approached, especially if you prefer to wear sandals, as the ants will not hesitate to sting humans. According to the Schmidt Pain Index, a reference showing the relative pain of arthropod bites and stings, harvester ant stings inflict a greater degree of pain than red-imported fire ant stings. The entomologist who created the index, Justin O. Schmidt, claims that a harvester ant sting feels like someone drilling into an ingrown toenail for a day or two. In fact, harvester ants produce the most toxic form of venom that has yet been found among insects. The ants are reddish in color and they prefer intense heat, making them a common sight in Arizona during the height of the summer season.

Have you ever sustained a bite or sting from an ant species?