Enormous Tarantula Hawk Wasps Inflict The Most Painful Stings Of Any Insect In The US, And Several Species Inhabit The Desert Southwest

Wasps are one of the most feared insect groups that exist, and for good reason, as wasps, such as yellow jackets and hornets, are highly aggressive, territorial and are capable of inflicting repeated stings that kill several people in all areas of the contiguous United States every year. Arizona is home to numerous wasp species, but few are feared by residents as much as the notorious “tarantula hawk wasps.” These wasps belong to the Hemipepsis genus, and several species can be found in Arizona, but the Pepsis formosa and Pepsis thisbe are the two most commonly encountered species in residential and urban areas of the state. 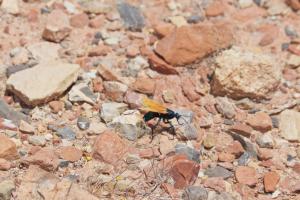 Tarantula hawk wasps grow to at least two inches in body length, and they are easily recognized on account of their colorful exterior, which tends to be a mixture of metallic blue, black and orange hues. Similar to the dangerous velvet ants of the Sonoran Desert region, the conspicuous coloring of tarantula-hawk wasps serve as a warning signal to predators that the highly venomous wasps are not to be preyed upon, as consuming specimens can poison even the fiercest of predators. Roadrunners are the only animals that have been documented as consuming tarantula-hawk wasps. These wasps get their name from their natural habit of preying upon tarantula species, which also explains their bulky and durable bodies, as these wasps paralyze tarantulas with their sting in order to provide their offspring with a high protein meal.

Tarantula-hawk wasps inflict the most painful stings of any North American insect species, according to the pain-scale developed by insect expert Christopher Starr. This scale rates the pain of insect bites and stings on a scale of 1 to 4, and the Pepsis formosan species is one of only two species to earn a rating of 4, the other being the desert fire ant. For some perspective, the velvet ant, which is often cited as inflicting the most painful sting of any insect, earned a rating of 3 by the Starr scale.

Have you ever encountered a large blue-colored airborne insect species?