5 Tick-Borne Diseases Have Infected Arizona Residents, But Only Two Are Considered A Growing Threat In The State

Tick-borne diseases are well known to be a serious public health threat in the northeast United States, which is where the greatest number of tick-borne diseases can be transmitted to humans, but the bloosucking arachnids are not usually associated with the desert southwest. However, Arizona is home to 25 tick species, including the brown dog tick, which is the only tick capable of infesting homes. Unfortunately, Arizona is located within a small geographic region where the brown dog tick can also transmit Rocky Mountain spotted fever to humans. In all other US regions, the brown dog tick can only transmit diseases to dogs. In Arizona, scorpions and disease-spreading mosquitoes pose a more significant public health threat than ticks, but surprisingly, a total of five tick-borne diseases have been documented as occurring within Arizona, but only two are considered a growing threat to residents. 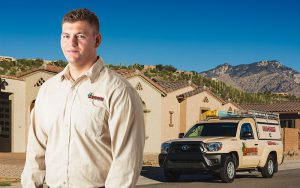 Are you concerned about the possibility of sustaining bites from disease-carrying ticks in Arizona?