The Rate Of Scorpion Sting Incidents In Arizona Is Unusually High This Year, And Experts Believe The Reason May Be Due The Current Stay-At-Home Order

Just like spiders, ticks and mites, scorpions are arachnids, and according to new fossil evidence, they are among the most ancient of terrestrial arthropods, as they abandoned their original ocean habitat for land nearly half a billion years ago. More than 2,000 scorpion species have been documented worldwide, at least 100 of which inhabit the United States, and around 60 species can be found in the desert southwest. Of these 60 scorpion species, four are commonly encountered in residential areas of Arizona, and only one species is known to be medically hazardous, and even deadly to humans. These four commonly encountered scorpion species include the Arizona bark scorpion (Centruroides sculpturatus), the Arizona giant hairy scorpion (Hadrurus arizonensis), the Arizona stripe-tailed scorpion (Paravaejovis spinigerus), and the yellow ground scorpion (Vaejovis confusus). 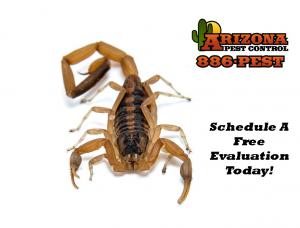 The Arizona bark scorpion is not only the most commonly encountered scorpion species within and around homes, it is also the only scorpion species that is categorized as being medically significant. This species is around 3 inches in length with slender appendages, and most specimens are pale-yellow or tan, but it is not uncommon to find darker specimens with stripes or checkered patterns on their back. Unlike the other four scorpion species commonly found in residential areas, Arizona bark scorpions do not readily nest in ground-burrows; instead, they are capable climbers, which is why they are often found congregating on interior and exterior walls and even ceilings. These scorpions live in close association with humans and they gather within wall voids where they travel throughout homes. According to data collected by the US Poison Control Center, 98 percent of Arizona bark scorpion stings occur within and around homes. According to a recent nationwide survey of pest control professionals, the Arizona bark scorpion was the eighth most commonly controlled stinging pest in residential areas of the US, which is surprising considering that this species can only be found in four of the 50 states.

Although the summer season has not yet arrived, scorpions are already prevalent in residential areas of Arizona. In fact, the Banner Poison and Drug Information Center states that the number of reported scorpion envenomation incidents is now 18 percent higher than it was this time last year. According to experts, the current heat wave may be prompting scorpions to migrate indoors to secure a cooler environment and obtain water. Also, the current quarantine has many residents constantly staying indoors. These two factors could explain why so many people are falling victim to scorpion stings. People tend to sustain indoor scorpion stings when they step out of bed in the morning, or when they use their backyard pool where scorpions commonly gather to cool down. Children under six have the highest rate of serious medical reactions to Arizona bark scorpion stings, so parents should be particularly mindful of their youngster’s outdoor activities, both indoors and out.

Have you ever sustained a sting from an Arizona bark scorpion?