With over 43,000 spider species in the world, it’s amazing to think that only 30 of them are dangerous to human beings. That is an extremely small number, considering the fact that spiders are almost as feared as snakes. Let’s take a look at what some of these dangerous species are.

One of the most dangerous spiders in the US, the brown recluse has venom that will destroy blood vessels when it bites a person, causing a fairly large skin ulger. The venom specifically targets the cell membrane transforming it into liquid, and a bite can take up to several months to heal. If an infection occurs, the person may also die, however, deaths are fairly rare.

Another dangerous US spider, the black widow sends about 2,500 people to poison control centers in the US every year. The bite of the black widow is not very painful initially, but as the venom enters the body, the person bitten may experience severe muscle cramps, nausea, and difficulty breathing due to the mild paralysis of the diaphragm. Most victims however will recover without any serious complications, unless they have a compromised immune system. 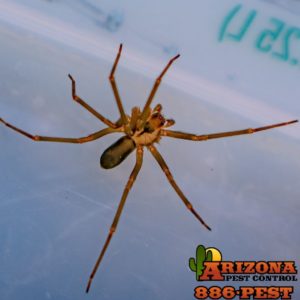 Another member of the widow family, this time we have the brown widow. This spider is much rarer in the US than our previous two entrants, but it can be found in southern California and some US states in the Gulf Coast. If black widows weren’t bad enough, the venom of the brown widow is twice as powerful. However, it is even less aggressive than the black widow, and will only inject a small amount of venom during a bite.

If two widows weren’t enough, we have a third – the red widow. This is another rare species in the US, but it can be found in the scrublands of southern and central Florida. It is not a spider that is aggressive towards people, but it will bite when threatened. The bite is very dangerous, but it will not kill healthy people if they receive treatment.

Finally, we have the funnel-web spider, which receives its name from the way it builds its web. It will build a funnel, and then sit at its bottom until it traps something, at which point, it springs to action to capture its prey and devour it. Unlike the other species on this list, this spider is actually aggressive, and it will kill human beings with its venom, if treatment is not applied. Luckily, it is normally not found in the US, being mostly present in eastern and southern Australia.

That concludes our list. Unfortunately, two of the spiders on this list are quite common in the US – the black widow and the brown recluse. If you see any of these two spiders in your home, it’s important that you call a pest control specialist right away. Contact us today and we will help you get rid of your spider infestation.

Barbie LaGrange
01:43 20 Sep 21
The people are friendly and knowledgeable.

Sharon B
12:44 29 Aug 21
AZ Pest Control treated our home, inside and outside, for kissing bugs. Certified Applicator William “Billy” Moseley did an outstanding job of inspecting, advising and treating, with great respect for our desire to spare non-target arthropods. Thank You Billy!!

Matthew J. Adams
23:22 27 Aug 21
Had a great experience with the initial assessment and subsequent techs. These guys not only know their stuff but are perfectly professional in their service.

Ana Rascon
19:18 26 Aug 21
I really like this company. I tried one before this (swift pest control) and they were not effective at all. Az pest control has decreased the amount of scorpions that come with living in Sahuarita. They are very quick to answer their phones and will send a tech out within 48 hours which gives me huge peace of mind. I have 2 reptiles and they have never been bothered with their products. I also have a NB baby and they were very diligent with that, asked me to leave the property for a few hours to keep baby safe. I am very happy with their services totally worth the bi monthly fee.

Patricia Castro
03:31 12 Aug 21
I’m so happy with the service we received from Arizona Pest Control. I was contacted immediately by Brianna to set up a date to have them come out and inspect our new home. Anthony was SO kind, helpful and professional. The estimate I received was beyond reasonable. I was even given a schedule for the next year so there’s no work on my part. Such a fantastic business to deal with. I’m just beyond pleased!! Thank you SO MUCH for everything! I’m so glad we found you!

William Thephasdin
14:10 10 Aug 21
Following my call AZ Pest had a technician scheduled right away to come perform an inspection. Brian De Nomme was assigned to come meet us and he was a great pleasure to work with. He asked great questions, gave great insights, did a thorough inspection, and left me with a plan of action to solve of our issues. I’ll definitely request Brian first if I ever have a need in the future, and I would highly recommend to others. Thanks Brian! – Bill T.

Sarah Davis
21:44 02 Aug 21
Very professional and efficient! Such an easy process to get started and I love the payment options. I’ve noticed a difference in pests too. No more ants or spiders around and I’ve seen dead insects in backyard. I feel so much more protected and the price is such a great value!

Bob Hogan
20:11 02 Aug 21
From the person who answers their phone to the sales and service people they sent out to our house, Arizona Pest Control was polite, professional and informative about their services. I highly recommend them.

Jocelyn Gaxiola
09:46 22 Jul 21
I recently started using their services and so far they’ve been great. They’ve been super informative through the process !

Bob Booth
21:44 21 Jul 21
Termite inspection and Centricon instalation. Several of the Centricon bait stations not installed flush to the ground leaving a tripping hazard. One such improper station, is located one step directly in the normal walkway from the patio to the yard.UP-date 7/21/21: The day after posting my original review, I was contacted by Arizona Pest Control which scheduled an appointment to review my post and take whatever remedial action necessary. Yesterday Mr Jonathan Armendariz, Lead Termite Technician, came to our house and was shown the poor installation of the Centricom bait stations. His eyes rolled over. He got his tools and went to work reinstalling ALL of the bait stations, not just the one that was subject of my review. Mr. Armendariz was most courteous. performed an excellent job of Customer Service and Skill. I am most happy with Arizona Pest Control; the final outcome in getting our pest control needs satisfactorily accomplished.

Jami Parrish
21:42 12 Jul 21
Always friendly and on time. Use them for termites and general bug maintenance.

chelsea pilarowski
18:24 12 Jul 21
From the very first phone call to each of my “treatments”, the people from Arizona Pest Control have been friendly, informative, and punctual. My home is still in the process of being “treated”, so have yet to see how well their services have worked, but so far I am very happy with their customer service and professionalism.

Vicki Kohout
16:10 12 Jul 21
Had black widow spiders and scorpions invading house and yard. Inspected, sprayed both interior and exterior. Visibility of the arachnids have decreased noticibly.

Gerard Maryak
15:35 12 Jul 21
I called AZ Pest Control after we were here for a few nights and a scorpion was crawling on our patio. Reached out to them the next day and an estimator came out that afternoon. Set up a first spray time a few days later. As promised more bugs came out in the open because of the material they used around the base of the house. Haven’t seen any bugs since that time and they soon will be back to do their one month follow up.

Al Spaet
22:22 07 May 21
We get notified prior to a treatment (every other month), have the same tech (Gary) doing the work without any mis-steps and are able to pay via the internet. It is a seamless process. I had a pest control service for 38 consecutive years in L.A. and now, after almost 7 years, feel the same way about Arizona Pest Control. Very satisfied.

charles brack
16:47 07 May 21
I found this company and its employees to be very knowledgeable and professional. They performed the services as advertised for a very reasonable price and we haven’t had any more problems with termites since they treated our property.

William Thompson
01:13 07 Mar 21
I do not have insects in the house. Prompt, professional, courteous, & friendly service, the technician is very knowledgeable. The service is a great value, I 100% recommend Arizona Pest Control.

Brian Brandis
16:59 01 Mar 21
Always very thorough with their inspections and reports. Have not had any issues with Rodents since we started using them from day one when we moved into our house. Would recommend them for anyone looking for a pest control company – rodents, spiders, centipedes, scorpions, etc.

B & B Godinez
23:55 27 Feb 21
Professional, knowledgeable, responsive and personable.

Concepcion Steed
13:10 24 Feb 21
It’s been a good service as far as getting rid of the bugs. I’m giving ya’ll a 4 star because I don’t feel I need to remind the tech to brush off any spider webs off the porch ceiling or around the outside windows.

Heidi Hatley
01:51 22 Feb 21
This company is so professional and knowledgeable, and they have high quality products that work!! We have been very happy with their services, and will stay loyal customers, for as long as we are in the area!

Julie Thul
19:45 20 Feb 21
We’ve been using Arizona Pest Control for over 20 years now and have never had a reason or desire to switch companies. They not only perform a great service for us, they are professional and very courteous/respectful. No hesitation in recommending them to anyone!

Carrie Skow
05:26 19 Feb 21
Arizona Pest is reliable and effective. Their employees are pleasant to work with and they have always been here on time. There was one month that they came out and sprayed, but for some reason we had 4 scorpion sightings about 3 weeks after that (usually they come spray every other month and we’ve never seen bugs other than this one time). We messaged them about it and they came out and re-sprayed free of charge! We are very happy with this company and would recommend them to anyone!
See all reviewsWrite a review