The Nuisance Insect Pests That Are Sometimes Mistaken For Large Mosquitoes 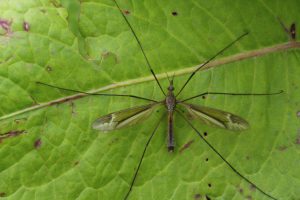 Crane flies are flies in the family Tipulidae. They are insects and look similar to large mosquitoes but, unlike mosquitoes, they do not bite people or animals

Most fly species that belong to the Diptera order are established worldwide. Diptera insect pests include common houseflies, horse flies, fruit flies, cluster flies, and crane flies. Crane flies are well known insect pests that often become a nuisance within and around homes in most parts of the world, including Arizona. Although crane flies belong to the Diptera order, these insects do not look like the typical flies that most people regularly encounter during the warmer months; instead, crane flies possess long thin legs and a 1 to 1.5 inch body length. Crane flies are often light brown in color with darker wings, which are extremely delicate and are a fraction of the width of a standard sheet of printer paper. Considering their unique body shape for a Diptera species, crane flies are often assumed to be larger-sized mosquitoes when they are spotted, or when the insects infest properties. Crane flies are also referred to as “daddy-long-legs” in some areas, as their long and thin legs make the insects look like the arachnids.

Crane flies do not possess mouthparts that can inflict bites on human skin, and they do not spread disease, but can establish a nuisance presence on properties, particularly in backyards and porched areas where the insects gravitate toward artificial light sources in large numbers. Most gardeners are familiar with crane flies and they are not well liked by plant enthusiasts due to their habit of infesting garden beds where they sometimes inflict damage to plants. In fact, crane fly larvae damage grass and plants by feeding on the roots and stems located at ground level. These insects may appear indoors occasionally, but they are most active near homes during the night. Crane flies only live for two week periods, making them quite active, as the insects are in a constant rush to mate. Crane flies typically mate only during the nighttime hours, and the insect’s mating behavior contributes to their reputation as nuisance pests. In addition to gravitating toward light sources, crane flies are commonly found flying erratically around water sources due to their occasional egg-laying activity in moist locations.

Were you under the impression that the crane flies described in the article were mosquitoes?