Natural disasters may excite some types of people, but for those who live through them, such disasters are never “exciting.” Earthquakes, tornadoes, hurricanes and floods occur all over the world each year. In some cases, what results from natural disasters can be even worse than the actual disaster itself. For instance, some studies have found that termite infestations can increase in regions that had been devastated by flood waters. Apparently, flood waters can push termite habitats into residential regions. Although nobody wants a termite infestation, some people may find termites preferable to scorpions and snakes. Unfortunately for residents of the Indian state of Kerala, a recent flood forced many people to evacuate their homes in the state. If the damages caused by this recent flood were not problematic enough, the disaster has caused many residential homes to become infested with scorpions and snakes. 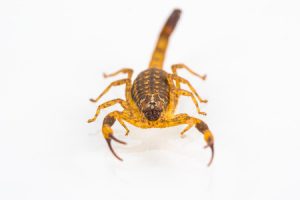 Officials in India have been warning residents of Kerala that both scorpions and snakes may be infesting homes that had previously been submerged by flood waters. The officials are estimating that thousands of deadly scorpion and snake species have been washed into people’s homes by flood waters. Many scorpions and snakes have been found in people’s cupboards, beds and underneath carpeting. One government spokesperson has urged returning residents to check underneath clothing piles and washing machines by using long sticks in order to prevent injury or even death. Hospitals in the state have been ordered to stock up on antivenoms in order to prepare for a government-predicted surge in scorpion stings and snake bites. One viral online video showed a woman in the state using a broom in order to smash a ten foot long snake that had been hiding out in her garden. Hospitals in the area have already reported an increase in patients claiming to have been stung by scorpions or bitten by snakes. The flood has destroyed an estimated 50,000 homes, and the worst may not be over.

If you lived in Kerala would you be too scared to return home?