Where On The Human Body Are House Centipedes Able To Inflict Venomous Stings?

House centipedes (Scutigera coleoptrata) are one of the most commonly encountered arthropod pests within homes nationwide, and their indoor presence is not well tolerated by most homeowners due to the species’ unsettling appearance and rapid movements. Centipedes are primitive creatures that dwell within moist and shallow soil beneath objects like stones, landscape ornaments, patios, and wood piles where they are rarely encountered by humans. The house centipede is unique for being one of the few centipede species that has become well adapted to living in close association with humans. Theoretically, as long as indoor house centipedes are able to obtain food and adequate shelter, they can remain within homes and buildings indefinitely due to their ability to establish reproductive populations indoors. While house centipedes are widely regarded as being tremendously ugly indoor pests that often become a nuisance within homes, they are almost entirely harmless to humans. However, while rare, house centipedes and their larger-sized relatives have been known to inflict venomous bites within homes. 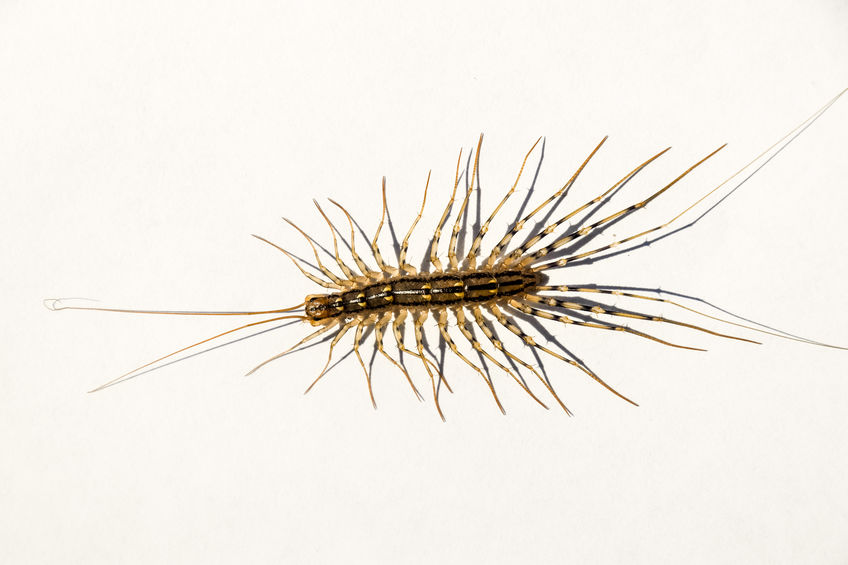 Not long ago, the National Capital Poison Center described a case that saw a man sustain a house centipede sting on his neck while cleaning his front porch. In response to the sudden sensation of pain, the man reflexively smacked the centipede, causing it to fall to the ground where the specimen was promptly consumed by his cat. The poison center agent recommended an oral analgesic for the worsening pain and an ice pack for the swelling, and with that, the man recovered rapidly. House centipede bites are rare because the pests possess very small venomous pincers that cannot penetrate human skin. Experiments have shown that house centipede pincers can only penetrate very thin layers of skin, such as the skin between toes and fingers. As it happens, the skin on the human neck has a very thin dermis, and therefore, the neck is lacking a fibrous collagen layer, which makes neck skin nearly as thin and sensitive as eyelid skin. House centipede pincers can easily penetrate neck skin, but they are unable to penetrate most areas of the skin where the dermis is thicker and collagen is more abundant.

Have you ever sustained a sting from a centipede of any species?