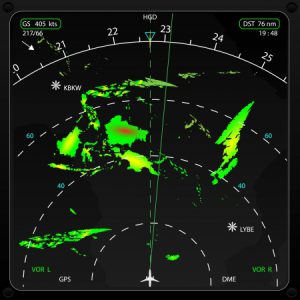 We have all seen weather radars while watching the weather channel or local TV news stations. Obviously, weather radars are designed to locate and track large areas of meteorological activity. Enormous masses of humid air that produce rainfall are tracked with modern weather radar technology in order to predict which regions will experience rainfall. The movement of snow, hail, tornadoes and hurricanes can all be tracked with weather radar. Of course weather radar can pick up other moving masses as well, but they must be exceptionally large in area in order to be spotted by radar. Every once in a while an expert will find a large mass of activity on radar that is not weather-related. In most of these cases large formations of certain airborne animals are being picked up by radar. Sometimes these animals are birds, but most of the time the unusual formations turn out to be huge swarms of insects.

It is rare for an insect swarm to become large enough to be picked up by weather radar, but it happens. In many cases, experts cannot always agree on what is causing certain formations to appear on weather radar. It is not uncommon for mysterious formations to appear and eventually disappear from radar while never being conclusively determined to be insect swarms. For example, back in 2013 the entire northern half of New Zealand was covered by some form of mass. A few experts thought that the formation could have been a dust storm, but most experts thought the formation was an insect swarm. However, experts could not agree on which type of insects were swarming to create the large mass.

Do you think that butterflies would show up more easily than most other insects on weather radar due to their relatively long wingspan?

Maria Geary
01:10 27 Jan 21
Arizona Pest Control is awesome. Their staff is always professional, friendly, and responsive. They have a full service with their membership. Anytime we’ve needed extra service, they’ve sent someone out without issue and have taken care of the problem. Highly recommend.

Kurt Breininger
23:38 26 Jan 21
Richard our Arizona Pest Control representative is great. He takes care of us both inside the house and outside. He always asks if we have any problems with different bugs and scorpions since his last visit. Cares about the customer. If he’s going to be late he always calls if the application before us lasts longer than expected. He always answers all our questions when needed. There are so many pest control businesses out there but I have had great service from Richard.

Malak Tfaily
22:57 26 Jan 21
Our service is performed by Bill. He is great and professional and always on time and willing to help. The whole team is very responsive to emails and requests. We have been very happy with their service!