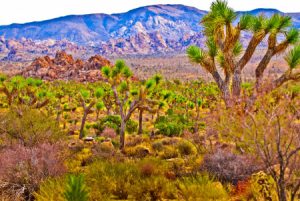 Charles Darwin surmised in his famous text Origin of Species that in the game of evolution insects and plants played a particularly important role in the other’s evolution. He claimed that the incredible diversity of the earth’s plant and animal life evolved due to pollination. He surmised that flowering plants and the insects that pollinate them must have evolved in conjunction with each other in a process Darwin referred to as “co-evolution”. This synergistic evolution process is what allowed them to flourish into the many dazzling array of pollinators and flowering plants that we see today. But not all pollinators and plants are created equal. Darwin deemed one particular team that demonstrated the “most wonderful case of fertilization ever published” in a letter he wrote. That dynamic duo is none other than the Joshua tree and the yucca moth.

The Joshua tree is probably the most iconic plant in the Mojave Desert. The Joshua tree has enraptured many over the centuries, inspiring numerous artists, filmmakers, as well as many a traveler searching for transcendence. This desert shrub has spiny fronds with clubbed tufts at the end that are topped by aromatic, waxy flowers that look as if they are twisting to reach up towards the desert sky. While the Joshua tree is beloved by humans, its evolutionary partner, the yucca moth, is not as admired and appreciated. The small bug appears unassuming, but a closer look reveals a creature just as otherworldly as the tree it pollinates. The yucca moth has an irregular mouthpiece that was designed to pair perfectly with the yucca tree’s blooms. Unlike a regular mouth, the yucca moth’s mouthpiece has strange, tentacle-shaped fronds that are extremely unique in the insect world and are essential for pollinating the Joshua tree, making them an essential part of the desert ecosystem.

The Joshua tree relies completely on the yucca moth to pollinate its flowers, as they don’t produce nectar to attract other pollinators. The yucca moth is able to use its nimble mouth tentacles to collect the pollen from the flowers on the Joshua tree and drop it off on the female part of the flowers, moving steadily from bloom to bloom to achieve this task. In return, the female moths have the perfect place to lay their eggs on the seeds of the flowers. The yucca moth caterpillars eat these seeds, which are their only source of food, after hatching and then crawl down to the ground to form the cocoons that will protect them while they mature into adult yucca moths.

The relationship between the Joshua tree and the yucca moth is incredibly unique. While most flowers are pollinated by accident when pollinators drop by to taste some yummy nectar. The yucca moth, on the other hand, pollinates the flowers of the Joshua tree knowingly as an act necessary for its survival. Their caterpillars depend on the Joshua tree’s continued survival and nutritious seeds to also survive. This means that the evolution of the yucca moth was essential for both the survival of the plant and moth, with both depending completely on the other in a symbiotic relationship. Neither could exist without the other. I’d say that’s a match made in Heaven…or rather the Mojave Desert.

The Yucca Moth and the Joshua Tree
Caleb Tennenbaum
No comments