Rattlesnakes are out in Tucson!

Spending Spring and Summer months in the great outdoors often means dealing with rattlesnakes. Rattlesnakes roam across several states, from coastal to mountain ranges. Many western states are afflicted by this poisonous creature include California, Arizona, Texas and New Mexico. The species that are most common to the Western US include the Northern Pacific Rattler, Western Diamond Back, Sidewinder, Speckled Rattlesnake, Red Diamond Rattler, Southern Pacific, Great Basin and Mohave Rattlesnake. 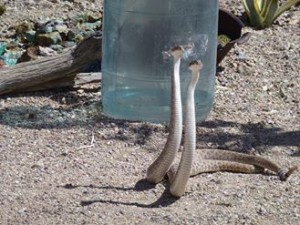 #Rattlesnakes can be found anywhere, but commonly find shelter among brush and rocks. In the evening, when the weather cools, they often venture out onto roads and streets to absorb the warmth into their bodies.

Apart from the rattle, the most distinctive identifying characteristics of the rattlesnake is a wide, flat triangular head, much broader in back than front, with a distinct “neck” region. The rattlesnakes has openings between the nostrils and eyes, which are hooded with elliptical pupils. There are also a series of dark and light bands near the tail above the rattles, that differ from the markings on the rest of the body.

If you come across the path of a rattlesnake, the simple thing to do is get out of that area. 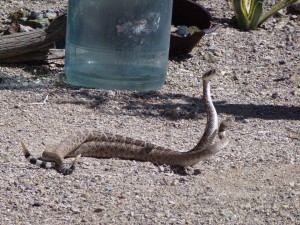 If you are bitten by a rattlesnake, stay calm and get to a doctor as soon as possible. AZ Pest Control Center advises:

Remember that a rattlesnake bite is potentially fatal, so be cautious and always watch your step. Be aware of your surroundings and that of your family while enjoying the great outdoors.

Bill Aragon
19:26 07 Feb 23
Extremely professional, friendly and explained all he was doing and why. He also explained what to look out for and preventative measures to reduce expenses, high recommended and they support our Veterans