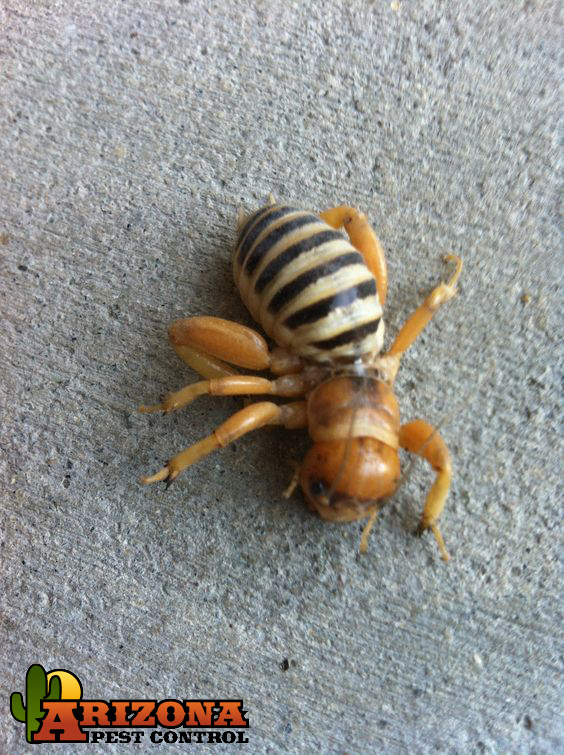 Several cricket species in Arizona are pests of homes and buildings, the most common of which include field crickets (Gryllus assimilis), and to a lesser extent, house crickets (Acheta domesticus). One of the largest cricket species that occasionally invades Arizona homes is commonly known as the “Jerusalem cricket” (Stenopelmatus fuscus). In addition to being the largest members of their genus at around 1 ½ to 2 inches in length, Jerusalem crickets possess outspread legs and a segmented abdomen that appear somewhat spider-like. Unsurprisingly, Jerusalem crickets tend to frighten residents who encounter them within or around their homes, and it is not uncommon for homeowners to mistake the crickets for spiders. In fact, this cricket species was greatly feared by native Americans despite the fact that they are non-venomous insects that are considered largely harmless. However, Jerusalem crickets are capable of inflicting painful bites when provoked, and they emit foul odors when distrubed. These crickets are native to the southwest, and for reasons that are not fully understood, they are becoming more prevalent in Arizona where they are entering homes at progressively greater rates.

Jerusalem crickets occasionally grow in excess of 2 inches and their entire body is yellowish-brown or amber in color. The most notable aspect of this insect species’ appearance is its sizable abdomen that features black horizontal bands. Unlike most crickets, Jerusalem crickets do not possess functional wings or vestigial wing pads,  and they do not make the signature chirping sounds indoor crickets are known for; instead, these crickets rub their hind legs against their abdomen to produce sounds resembling two pieces of sandpaper rubbing together. Despite their growing prevalence in Arizona, these crickets are not often sighted by residents due to their nocturnal nature, and the few sightings that are reported mainly occur during the winter, spring and early summer seasons. Jerusalem crickets have been known to appear on the third floor of apartment complexes, but they are usually encountered in small numbers on the ground floor of single-family homes. These crickets may enter homes to seek refuge from heavy monsoon rains and cold weather during the winter season. Aside from their bizarre appearance, the Jerusalem cricket’s slow and sluggish movements make specimens instantly recognizable.

Have you ever encountered one or more Jerusalem crickets within or around your home?