If a fire ant stings you… 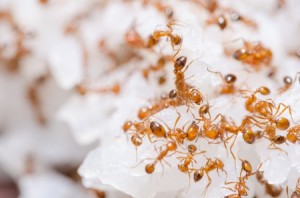 There are a half dozen different species of fire ants in the Southern United States, some of which are native and others imported.  Although all can sting and hurt humans, the red imported fire ant is the most threatening.

Fire ants are known for the large mounds of dirt they create above their underground colonies. These mounds can even be found in garages or in crawlspaces.  If these mounds are disturbed, fire ants will race to the top and surround and sting whatever is disturbing their nest.  To avoid fire ants – avoid these mounds.

Fire ants are sensitive for vibration or movement.  They race up a person’s leg and when one ant stings, that person jerks or moves.  This movement triggers the other ants to sting in response.  Fire ant venom causes small blisters to form within a day of being stung.  These little pustules usually cover the skin of the person who was stung and can easily become infected.

If a fire ant stings you, take the following steps:

If a fire ant stings you...
Arizona Pest Control Company
No comments