How Potent Is Black Widow Venom Compared To The Venom Of Other Animals, And What Percentage Of Black Widow Bites Prove Fatal?

Widow and recluse spider species are the two groups of medically harmful spiders found in the US, and their highly venomous bites hospitalize countless individuals in the country each year. In very rare cases, venomous bites inflicted by widow and recluse spiders result in fatalities, but more people are killed by cows each year, so fearing these spiders is considered irrational by experts. Of the 13 recluse spider species found in the US, the brown widow is the most well known, widespread, and dangerous of them all due to their preference for dwelling indoors amongst humans. Five recluse spider species can be found in southern Arizona, and although they inflict medically significant bites, they inhabit undisturbed desert areas where they are very rarely encountered by humans. 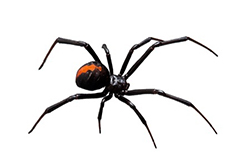 Of the three black widow spider species found in the country, all have been known to inflict equally noxious bites that have resulted in fatalities. The western black widow (Latrodectus hesperus) is the only black widow species found in Arizona where it is a common household species, but a closely related and exotic black widow relative was recently found in Arizona for the first time. This species is known as the brown widow (L. geometricus), and while their venomous bites are not as dangerous as those of black widows, medical case reports have described individuals as experiencing a number of systemic symptoms in response to this species’ bite, including muscle pain, abdominal pain, weakness, difficulty walking, pain in lymph nodes, and fever.

According to Dr. Alice L. Anderson, an entomologist for the State of North Carolina, black widow venom is more potent than the venom of all other spider species in the US. In fact, the Dr. also claims that black widow venom is 15 times more potent than rattlesnake venom. However, she also states that black widow bites are not as dangerous as those inflicted by rattlesnakes because the latter injects significantly more venom into the bloodstream when they bite. While one percent of black widow bites prove to be fatal, 15 to 20 percent of prairie rattlesnake bites result in a fatality.

Have you ever spotted a black widow in your home? Get A Free Black Widow Control Qoute for your home or business.