They only thrive on mesquite trees, and pass their time by munching on the tree’s tiny leaves.  Because they do their host no damage, and usually crawl on its tops, they are a lesser known insect: the mesquite bug.  Scientifically labeled as Thasus neocalifornicus, they live in New Mexico, mesquite-filled Arizona and, of course, California. 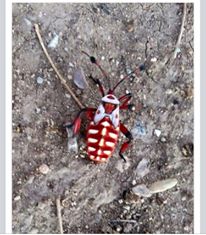 While large and beetle-like, they are not of the beetle family.  Known colloquially as the “giant mesquite bug” they are scaling tree trunks this time of year, so are more likely to be spotted by the layperson.  While they resemble beetles, they are in fact “true bugs.”

What the difference between a beetle and a bug, anyway?

Beetles are in the largest order of insects, Coleoptera, while true bugs are among one group of Hemipterans.

Structurally, beetles have compound eyes in the head, mouths made for chewing, and antenna with little branches called antennomeres – of which they have up to ten.  True bugs have four large antennomeres and their mouths don’t chew but pierce, or suck.  Beetles bodies are one hard shell, whereas bugs bodies are only hard in the front, where forewings are, then membrane-like near the tips.  Simply put, beetles have a single, rounded shell that is hard whereas bugs tend to look like they have separate parts in a clunkier, more cornered body shape.

Maria Geary
01:10 27 Jan 21
Arizona Pest Control is awesome. Their staff is always professional, friendly, and responsive. They have a full service with their membership. Anytime we’ve needed extra service, they’ve sent someone out without issue and have taken care of the problem. Highly recommend.

Kurt Breininger
23:38 26 Jan 21
Richard our Arizona Pest Control representative is great. He takes care of us both inside the house and outside. He always asks if we have any problems with different bugs and scorpions since his last visit. Cares about the customer. If he’s going to be late he always calls if the application before us lasts longer than expected. He always answers all our questions when needed. There are so many pest control businesses out there but I have had great service from Richard.

Malak Tfaily
22:57 26 Jan 21
Our service is performed by Bill. He is great and professional and always on time and willing to help. The whole team is very responsive to emails and requests. We have been very happy with their service!