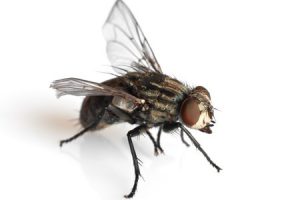 It is not often that you see flies submerging themselves in water in order to secure tasty algae, but in certain regions of the western United States these flies cannot be missed. Lakes that are located in the western US, such as Mono Lake, Owens Lake and the Great Salt Lake all have interesting insects and marine life inhabiting the waters and the surrounding land. You may have already figured out that these lakes are all high salinity alkali lakes. Naturally, some types of insects and marine life that inhabit these regions are unique, as adapting to the salty waters is necessary for survival. The few organisms that inhabit these lake regions may look similar to their relatives in other regions. But the alkali fly has features that make it one of the most unique flies on the planet. The alkali fly and its larva must feed on algae beneath the lake’s surface regularly.

The high salinity and alkalinity of these lakes makes these regions relatively inhospitable to many marine animals. In fact, there are only six insect species that inhabit these particular lake regions. The alkali fly’s larva develops beneath the surface of the salty water. To be more specific, this species of fly spends two of its three life stages below the water’s surface at all times. In order for the larva to survive the high salt and alkaline environment, its lime gland has become modified over the course of evolution. This gland is used by insects to help them excrete waste materials. The larvae feed on algae during development. The adult flies are considered terrestrial, but they must also feed on algae for sustenance. The algae that these flies feed on include diatoms, filamentous green algae, blue green algae and possibly protozoa bacteria. A portion of the fly’s body, known as the “setae”, creates a bubble that encapsulates the adult fly while it is underwater. These flies can travel as deep as eight meters below the water’s surface. The famed author Mark Twain even wrote about his experiences with alkali flies in his book entitled Roughing It. Luckily for the alkali flies, the harsh saltwater environment keeps many predators away. However, these flies are often consumed by birds, and certain parasites can also be a problem for these odd insects.

Have you ever heard of an alkali fly? Did you even know that these flies existed?