Last week a young boy in London discovered a Brazilian wandering spider within a container of locusts that he had purchased as lizard feed from a pet store. While it may seem normal to find a spider or two in a bag of insects, it is not normal to find a Brazilian wandering spider anywhere in the world except for tropical regions of South America. The BW spider is one of the world’s most venomous spider species. In fact, the BW spider is listed in the Guinness Book of World Records as the most venomous spider species on earth. The spider claimed 14 lives until an antidote was developed during the 1990’s. 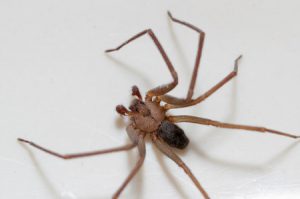 When the young boy, Charlie Wade, showed what he claimed was a BW spider to his parents, they responded with literal disbelief. After all, how could a deadly spider from South America wind up in pet feed sold in London pet shops? However, after close examination, Wade’s father became convinced of his son’s claim. Charlie himself initially couldn’t believe what he had found, as he buys bags of locusts every week in order to feed his bearded dragon lizard. The locusts that Charlie buys are supposed to be alive, but the latest bag contained locusts that had all died somehow. After inspecting the bag, Charlie learned that the locusts died as the result of the BW spider contained within. Charlie himself was lucky to have avoided a bite from the spider.

Earlier this year, a BW spider wound up in Tipton, England after a man purchased bananas from a local market that contained the venomous arachnid. The man did not notice the presence of the spider on the bananas until he took them to his office. At first the man and his coworkers planned on flushing the arachnid down the toilet, but a coworker decided to keep the spider in a cereal box so that it could be safely transferred to the Bristol Zoo, where it likely remains to this day.

Do you ever worry about buying produce that contains hidden spiders?